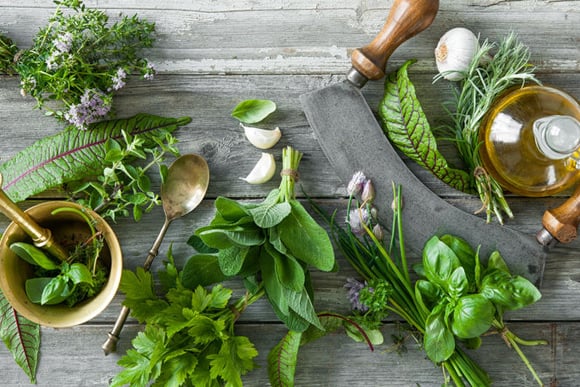 Soups, stews, roasted vegetables, curries, chili, are just a few of the delicious home cooked, warming, meals that come around during the fall and winter seasons. When we bring these foods to the table, there is so much more that just a warm meal, there are usually numerous culinary and medicinal herbs in each bite.

Some of our most common culinary herbs have been first line medicine in our kitchen for centuries. Cooking with these gives us an immune boost, digestive help, anti-inflammatory support, and any number of other medicinal properties that are carried in those simple herbs we throw into our home cooked meals. Below are just a few of our favorite and most commonly found herbs in the kitchen.

Rosemary (Rosmarinus officinalis)
A flourishing Mediterranean herb, Rosemary can be seen growing throughout the temperate climates around the world. This pungent herb contains rosmarinic acid which is a powerful antioxidant, antiinflammatory, and anti-microbial compound. It has numerous volatile essential oils all of which carry health benefitting properties such as stimulating, diaphoretic, and tonifying. Rosemary also contains numerous vitamins and minerals such as Vitamins, C, A, B-complex, and minerals such as calcium, copper, magnesium, Iron, manganese, and zinc. Historically, Rosemary has been used to strengthen the memory as it is considered a nootropic herb, one that stimulates blood flow to the brain.

Thyme (Thymus vulgaris)
Native to southern Europe and the Mediterranean regions, Thyme packs a punch when used as medicine. It has numerous phytonutrients, minerals and vitamins in those tiny leaves. The main essential oil in Thyme, thymol, has been found to have anti-septic and anti-fungal properties. Researchers published in the 2004 issue of the journal Food Microbiology that thyme essential oil was found to decontaminate lettuce that had been inoculated with Shigella, a highly pathogenic organism that triggers diarrhea and causes intestinal damage.

Many of the most common and powerful antioxidants are also found in Thyme. Zeaxanthin, lutein, and luteolin are just a few, and fresh thyme has been found to have one of the highest antioxidant levels according to its ORAC (Oxygen Radical Absorbance Capacity) score. It is also a great source of vitamins A and C, and a good source of manganese, copper and iron.

Sage (Salvia officinalis)
Another Mediterranean herb, also found in South-East Europe and many of the temperate climates around the world, Sage has been bred to produce a number of cultivars for both culinary and medicinal uses. Sage has numerous active essential oils which are primarily anti-inflammatory, anti-allergic, antifungal, and anti-septic. One of the components, Thujone, improves mental concentration and attention span due to its effect on certain neurotransmitters. When you think of the phrase “Sage advice” and the reference to a wise elder as a “Sage”, you can get the idea that this herb has played an important role in historical context as improving the memory at all ages. Salvia officinalis is often included in botanical blends for women after menopause due to its cooling and hormone modulating effects. In 2003 research was presented at the British Pharmaceutical Conference that showed that the dried root of Salvia miltiorrhiza contains active compounds similar to those developed into modern drugs used to treat Alzheimer’s Disease. It has been considered a sacred herb throughout the centuries as it has so many medicinal uses. Even its name Salvia comes from the Latin word ‘salvere’ translated as “to be saved”. Sage has healthy amounts of vitamins A, C, K, and B-complex. It also carries a number of minerals and phytonutrients.

Ginger (Zingiber officinale)
This pungent, spicy, root herb is native to southeast Asia, but throughout the centuries made its way through China, India, the Middle East, the Mediterranean, and eventually the Spanish introduced it to the West Indies, Mexico and South America in the 16th century. There is a tremendous amount of research describing the numerous therapeutic properties of ginger, including antioxidant, antiinflammatory, analgesic, digestive, anti-emetic, and immunomodulating. Ginger has numerous phenolic and essential oil compounds that give off that distinct ginger-y scent such as gingerol, shogaol and citral to name a few. Each of these aid in the many actions that ginger works on in the body. For example, gingerols have been shown to improve intestinal motility (among so many other actions) and are often used in the treatment of Small Intestinal Bacterial Overgrowth as the pro-kinetic to help restart gut motility. Researchers have also found that the phenolic compound zingerone, which is only present in dried or heated ginger, is effective against E.coli induced diarrhea due to its ability to inhibit enterotoxins of the pathogen.

Eating Your Medicine
The fall and winter seasons are full of holiday fun, warming food and drinks. Remember that each meal and each beverage of choice has the potential to act in benefit to or against your good health depending on the individual ingredients. We all know what is best for us intuitively; moderation is the key at all times. Enjoy the process of preparing each nutritious, home-cooked meal this season. Think about how much love and medicine you are putting into each meal! Cooking can be a contemplative practice and can verge on a form of meditation if it can bring you into the present moment and help you clear your mind. If you haven’t done much cooking or feel it’s just not your thing, follow a few simple recipes that are based on whole food nutrition (no boxed ingredients) and see how your creativity soars. Eventually you might start to improvise, and you’ll be so surprised at how creative you can be with your home cooked meals.

From our family to you and yours, Happy Holidays!

Overdue For A New Point Of View On The Flu?

Evaluation of Gait Disorders in the Elderly