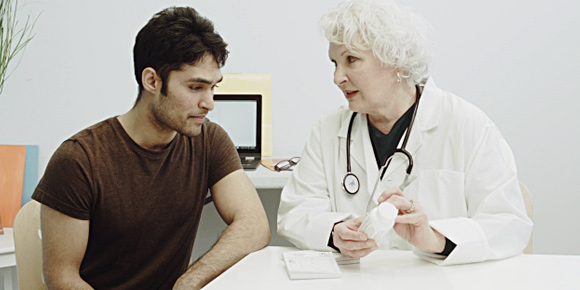 Urethritis or inflammation of the urethra (the tube leading from the bladder to the outside of the body) is a very common condition. Physicians treat more than three million cases each year, typically with antibiotics. While antibiotics are often successful in eliminating symptoms, the patient is frequently left with a disruption of the intestinal flora leading to digestive disturbances, a susceptibility to repeated infections, or an infection that is driven into deeper organs of the body such as prostate and kidneys.

Although allergies or hormonal changes can cause urethritis, in the vast majority of cases, it is sexually acquired. The incidence is higher in younger and more sexually active males. Men and women may also harbor an infection for years passing it back and forth with their partners without being aware they have an infection.

Anatomical factors
The urethra provides a conduit for the elimination of urine from the bladder and also plays a role in protecting the rest of the urinary system from infection. Differences in anatomy and physiology between men and women contribute to differences in the types of symptoms seen with inflammation.

The male urethra is approximately 15 to 20 centimeters long, originating in the urinary bladder and ending at the meatal opening of the penis. It can be broken down into 3 distinct parts, the prostatic urethra, membranous urethra and spongy urethra. Each has its own characteristics, and from a symptom standpoint, knowledge of each region’s function can help lead the physician to the source of the problem. These areas are also noted in the homeopathic repertory as bladder neck, fossa navicularis, and urethral meatus respectively. In addition, the types of pain and discharge experienced can often help the clinician pinpoint the site and degree of inflammation. While in conventional medicine this isn’t as important, to the homeopathic clinician, their notation can often help with remedy selection.

In men, part of the urethra runs through the prostate gland and with inflammation, it may be difficult to distinguish between urethritis and prostatitis. Therefore, many physicians will perform a 3-glass urinalysis to determine the location of the infection. This type of procedure requires that the patient collect 3 different urine samples before and after prostatic massage that are analyzed for mucus, RBC’s and WBC’S.

The female urethra is a shorter muscular tube 2 to 6 centimeters in length and lined by a mucus membrane. The mucus membranes size changes during a woman’s monthly cycle as it is affected by estrogen-progesterone fluctuations. Men do not experience this and thus their urethral mucosa is much thinner. Consequently, men are more susceptible to infections and know much sooner when they have an inflammation of the urethra than women do. Women may have a low-level urethritis and not be fully aware of it or think that they have a bladder infection or are just suffering from urge incontinence. Women present more often with chronic urethritis while in men chronic prostatitis is commonly seen. The shorter urethra in women also makes them much more susceptible to bladder infections.

A condition termed senile urethritis, due to hypoestrogenism during menopause, results in a dry and pale urethral mucosa. This may result in vaginal itching and irritation, frequency, burning with urination and a sense of urgency. Stress incontinence is a common finding with senile urethritis.

Individual susceptibility and causative agents
While urethritis is almost always acquired from intercourse, not every person exposed to organisms such as Neisseria gonorrhea or Chlamydia trachomatis will contact the disease. It depends upon the individual’s susceptibility. Both the male and female genital-urinary system possesses defense mechanisms designed to fend off infection. In women it is the secretion of the periurethral glands of Skene and monthly menstrual cycles that allow for a cleaning and protecting of the urethra and bladder. In men it is the prostate gland which acts as the first line of defense against genital-urinary tract infection. In conjunction with the bulbourethral glands, the prostate secretes a thin milky substance, high in Vitamin C and zinc, prior to and following ejaculation to clean the male urethra.

There are about 1 million new cases of gonococcal urethritis (GU) (i.e. caused by gonorrhea) and 2 million cases of non-gonococcal urethritis (NGU) every year. The discharges of each type are fairly characteristic of the respective infections. Careful observation of the discharge coupled with subjective symptoms can lead the clinician to the correct homeopathic medicine. Because of the considerable variation in the type of discharge seen with NGU or non-specific urethritis, the clinician or patient can often miss them. They are usually of a clear to whitish mucus discharge and will be present in varying amounts depending upon the time of day and severity of the infection. Symptoms of gonococcal urethritis in men are usually much more noticeable and present as a purulent yellow to greenish discharge and can be very painful. The severity of symptoms may range from severe to mild to totally asymptomatic. Here, too, the severity of the symptoms are more a function of the individual’s susceptibility, constitutional and miasmic make ups that predispose them to developing the disease. Symptom severity, past medical history and concomitant mental-emotional symptoms can help the clinician determine the probable miasm which helps with remedy selection.

Chlamydia trachomatis, which is difficult to eradicate with antibiotics. In general, if gonorrhea is present, so is Chlamydia about 80% of the time.

Trichomonas vaginalis, is not as often seen in males as females.

Herpes simplex, is a rare etiologic agent for urethritis and external lesions must be present for a diagnosis.

Eschericia coli, is more often seen in women than men but increases in prevalence in older men with enlarged prostates, urinary and fecal incontinence.

Yeast, which can be difficult to diagnose but are more prevalent than most people think.

Unknown etiology, is a category now recognized as a contributing factor to NGU about 20% of the time. Allergens from specific foods or environmental exposure are the typical causes.

Conventional treatment
Most patients receive one or several courses of antibiotics. Even if the correct antibiotic is prescribed, and the “organism” is eradicated, however, the body’s healing process is often disrupted so that the infection either reoccurs, or goes deeper into the body, with patients developing chronic urethritis, cervicitis or prostatitis. Homeopaths view this driving of the illness into deeper areas of the body as “suppression” of an illness.

Homeopathic treatment
Homeopaths often see these patients many years after the initial infection, when they come in for treatment of chronic disease. Patients frequently report that they have never been well since the original urethritis and antibiotic treatment. In my experience, careful homeopathic treatment is very effective in treating these patients and can fully eradicate the disease. As homeopathic treatment progresses, the patients will typically re-experience some of their disease symptoms, according to Herring’s Law of Cure. As every disease has a beginning, middle, end and recovery period, so healing will occur in a reverse process, according to the Law of Cure. Homeopathic medicine allows for this process to complete itself and is the reason why it is so effective in treating chronic disease.

The following case illustrates how homeopathic medicine can clear the disease after repeated antibiotics did not.

Objective:
Upon external examination there was no swelling or discharge noted. The prostate gland was of normal size and consistency and the urethral meatus showed no lesions or inflammation.

Urinalysis:
A 3-glass urinalysis was performed. Microscopic exam of the first 10 cc’s showed 100 to 150 WBC’s per hpf, mucus 1+ to 2+, a few RBC’s are present and no bacteria were found. The second void of 50 cc’s showed negative findings for urine chemistry and the microscopic exam was unremarkable. The third void following prostatic massage was negative.

Assessment:
Based upon the findings of considerable pus in the first void but not following prostate massage, a diagnosis of urethritis, probable non-gonococcal was made.

Follow up 10 days later
The patient reported that his symptoms cleared quickly within 24 hours. There had been no spasm with urinating in the morning and he has had no discharge for the past 8 days. He feels better mentally-emotionally as well but doesn’t know why. He wanted to know why I needed to see him back so soon as his other doctors didn’t want to see him at all. A repeat urinalysis following prostate massage showed 0-8 WBC’s/hpf, 1+ mucus, and no bacteria.

He was clearly responding to the treatment plan and that remedy 30c was acting. The few WBC’s present is a normal finding at this stage of the healing process. It is easy to tell when the remedy is working if you are also using a botanical medicine, as the symptom pattern will clear much quicker from the remedy than from the botanical medicine. The patient was advised to continue the treatment plan for the next 2 weeks in order to allow the body to complete its healing process.

Case I Analysis: The patient was given Cannabis sativa based upon the rubrics consulted and a review of the materia medica.

Cannabis sativa: mental and head symptoms less pronounced than Cann I; urethra very sensitive to touch, patient may walk with legs apart to reduce pressure; has more burning and smarting than Cann I, similar to Cantharis.

Even though there was not excessive pain with this condition, Cannabis sativa was chosen because of the excessive sexual desire and gleety and painless discharge. The patient did not follow up after the first return visit, not an uncommon occurrence in young men.

Acute urethritis is a condition very amenable to homeopathic treatment, and in my experience, works faster and more completely than antibiotics. This includes gonococcal urethritis as well. As homeopathic practitioners we tend to see more chronic cases however, and often the initial prescription will require a follow up remedy once the initial layer has been removed. This helps to decrease the patient’s susceptibility to reinfection.

Top Of The Class

Menorrhagia: What Every Woman Should Know