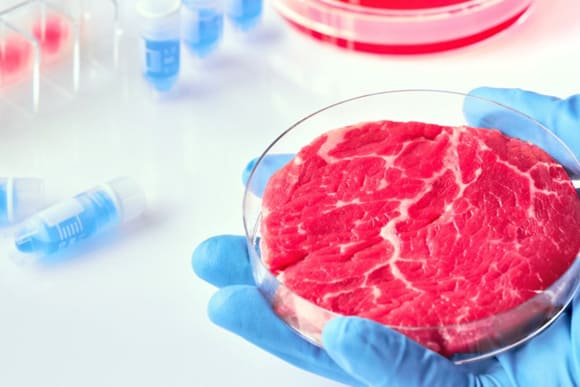 Sue S asks: What is all this I am hearing about laboratory grown meat? What is it and is this safe to eat?

Answer: Cell cultured meat is made from genetically engineered yeast that make a specific soy protein and a substance called soy leghemoglobin. Soy leghemoglobin which stands for legume hemoglobin, is the substance that gives the red color to the lab grown “meat” similar to what is found with real meat and helps to impart a “meaty” flavor. The soy leghemoglobin is then added to the burgers during the fermentation process. Apparently, a piece of fresh biopsied animal tissue is added to induce cells to differentiate into muscle for meat. The process occurs in vats similar to those used to make beer. According to the food manufacturers, the benefits include greater sources of protein for an increasing world population; addresses world hunger sustainably; reduces greenhouse gases; ends cruel & unhygienic industrial animal farming and addresses antibiotic resistance.

An objection to the Food and Drug Administrations (FDA) approval of genetically engineered foods has been filed by the Center for Food Safety (CFS) a nonprofit public interest group. They make the case that: “(1) FDA did not require testing of the raw product or the genetically engineered yeast; (2) FDA’s approval will allow GMO ‘heme’ to be used in new cell-based products without additional testing; (3) the product is not properly labeled; and (4) FDA failed to satisfy the “convincing evidence” standard that applies for approval of new color additives,”

Other critics such as Tom Nelter, chemicals policy director at the Environmental Defense Fund (EDF) and Michael Hansen, PhD, senior staff scientist at consumer reports say that while there have been scientific papers written regarding cell-cultured meat, none has actually analyzed the nutritional components of the finished product and further, that academic institutions have not been given samples, so they could do so. According to Michael Hansen: “This implies “problems behind the scenes,” … “I doubt this technology will work.” Both have been critical of the FDA for allowing the food industry to move forward with cultured meat and are concerned that they will allow it to be ushered in under the FDA’s Generally Recognized As Safe program where by the FDA relies solely on the manufacturers own documentation that bypasses the public comment phase. (The Generally Recognized As Safe program was the same one that allowed the COVID vaccine to be fast tracked without proper testing or comment.)

Also, of concern are the possible implications that ingredients in the genetically modified meat products have on the human microbiome. The concern is that the genome and genes themselves can be affected by epigenetic changes without even touching the DNA causing genetic changes with unknown consequences. Epigenetic changes are reversible and do not change ones DNA. However, what can occur is how your body reads a DNA sequence resulting in changes as to how your DNA works.

What I also found somewhat disconcerting in addition to the lack of knowledge as to what if anything else goes into the lab grown meat, is who is promoting its use. Individuals such as Bill Gates, Sir Richard Branson and food companies such as Cargill and Archer-Daniels-Midland are already heavily investing into the technology. Because of the lack of over site by the FDA, and the fact that the FDA is top heavy with industry representation, one should be cautious about consuming laboratory grown meat and other foods that are being developed.

Aren’t masks supposed to stop the spread of COVID-19? Why do the number cases continue to rise?