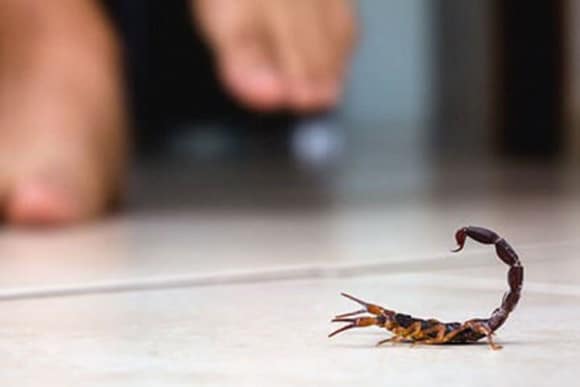 Scorpions don’t bite but they do sting. Remaining calm is important in treating the sting as it slows down absorption of the venom. Scorpion stings are not difficult to treat. We have many types of scorpions in Arizona, and even if you are stung by the Arizona Bark Scorpion, the most dangerous and venomous of the scorpions in Arizona, it is not likely to be fatal or even to have long-lasting effects.          It is however important to recognize scorpion sting symptoms which are immediate pain or burning, very little swelling, sensitivity to touch, and a numbness/tingling sensation.

If you stung by any scorpion, including the venomous Arizona Bark Scorpion, here are some immediate actions you should take:

Why does it seem that some people are more susceptible to mosquito bites than others? The answer may be because of the compounds we spread on our skin or odors we emanate. Research has suggested that people with high concentrations of steroids or cholesterol on their skin surface attract mosquitoes. Mosquitoes also target people who produce excess amounts of certain acids, such as uric acid, probably being attracted by the smell. Any type of carbon dioxide is attractive, even over a long distance. As larger people tend to give off more carbon dioxide, mosquitoes typically prefer munching on adults to small children. Children however are very active which also attracts mosquitos. Pregnant women are also at increased risk, as they produce a greater-than-normal amount of exhaled carbon dioxide. Movement and heat also attract mosquitoes, so playing sports and sweating increases your chances of becoming a mosquito meal.

One in 10 people are highly attractive to mosquitoes but it’s not dinner they’re sucking out of you. Female mosquitoes (males do not bite people) need human blood to develop fertile eggs. Mosquitos transmit certain diseases such as malaria, a disease not seen as much in the U.S. these days but is found in tropical countries.

Here are some natural mosquito repellants you can try to cut down the chances of being bitten. Our thanks to Heather Caruso for passing them along.

Three species of desert fire ants inhabit the southwest: Solenopsis xyloni (southern fire ant), Solenopsis aurea and Solenopsis amblychila. S. xyloni has the widest distribution of the three species in Arizona. If the nest location poses no hazard to people, the best solution may be to do nothing. Red Imported Fire ants (Solenopsis invicta) are not established in Arizona yet but do show up periodically. These ants are more aggressive than our native fire ant species and the stings are far more painful.

The fire ant’s attack is a two-part process consisting of a bite and a sting. When one ant stings, they all sting and inject a venom that causes the release of histamine, a chemical in our bodies that can produce pain, itching, swelling and redness of the skin. Within seconds after the stings, discomfort occurs at each site and a small red welt appears. Each welt can enlarge rapidly, depending on the amount of venom that was injected and the victim’s sensitivity to the venom. The reaction persists for up to an hour, and then a small, clear blister will form. The fluid in the blister may turn cloudy, and the area will begin to itch. Most people experience only a small amount of redness around the sting site. A small percentage of people however are sensitive to the venom and experience more extensive redness and swelling. A few victims have extensive allergic reactions such as breathing difficulties or widespread swelling of body parts or worse which requires a visit to the ER.

Fire ants do not commonly nest in buildings. If found inside they are generally being drawn there by FOOD. Extreme temperatures may also bring them indoors. If found inside, do not spray but make sure floors are clean, especially the corners where food can accumulate. Spraying will not eliminate the ants but may increase them.

As with any insect bite, applying a cold compress, taking Ledum or Apis 30C may alleviate the initial symptoms. If symptoms persist, contacting the clinic or visiting the local emergency room is recommended.

Ticks  are small spider like animals (arachnids) that bite to fasten themselves onto the skin as they feed on blood. Ticks live in the fur and feathers of many birds and animals. Tick bites occur most often during early spring to late summer and in areas where there are many wild animals and birds.

Most ticks do not carry diseases, and most tick bites do not cause serious health problems. But it is important to remove a tick as soon as you find it as those that do can pass along some serious and debilitating diseases. Removing the tick’s body as soon as it is discovered helps avoid diseases the tick may pass on during feeding. Most importantly, removing the tick’s head helps prevent an infection in the skin where it bit you.

Usually, removing the tick, washing the site of the bite, and watching for signs of illness are all that is needed but some people may develop an allergic reaction to a tick bite. This reaction is usually mild with a few annoying symptoms. But in rare cases, a severe allergic reaction resulting in anaphylaxis may occur.

Many of the diseases ticks carry cause flu-like symptoms, such as fever, headache, nausea, vomiting, and muscle aches. Symptoms may begin from 1 day to 3 weeks after the tick bite. Sometimes a rash or sore appears along with the flu-like symptoms. Common tick-borne diseases include: Lyme disease, Rocky Mountain Spotted fever, Tularemia, Ehrlichiosis. Relapsing fever, Colorado tick fever, and Babesiosis.

It is important that the tick be removed immediately upon being discovered and if possible, preserved so it can be identified by you physician. Again, use of Ledum 30C as an initial medicine is recommended.

Brown recluse spider bites often go unnoticed initially because they are usually painless bites with little tissue destruction. Occasionally, some minor burning that feels like a bee sting is noticed at the time of the bite. Symptoms usually develop two to eight hours after a bite. Symptoms commonly encountered are severe pain at the site which occurs after a few hours, itching, nausea & vomiting, fever, and myalgia (muscle aches/pain).

Initially the bite site is mildly red and upon close inspection may reveal fang marks. As time progresses, the bite site will become firm and heal with little scaring over the next few days or weeks. Occasionally, the local reaction will be more severe with erythema and blistering, sometimes leading to a blue discoloration, and ultimately leading to a necrotic lesion and scarring.

As with any bug bite, keeping it clean, using ice and a few doses of Ledum 30C will help alleviate symptoms. Consultation with you doctor is in order.

A bee sting is strictly a sting from a bee (honey bee, bumblebee, sweat bee, etc.) but it most often can mean a sting of a bee, wasp, hornet, or yellow jacket. Some people may even call the bite of a horsefly a bee sting. The stings of most of these species can be quite painful and are therefore keenly avoided by many people.

Bee stings differ from insect bites in that the venom or toxin of stinging insects is quite different. Therefore, the body’s reaction to a bee sting may differ significantly from one species to another.

The most aggressive stinging insects are vespid wasps (including bald-faced hornets and other yellow jackets) but not hornets in general (e.g., the European hornet is less harmful). All of these insects aggressively defend their nests.

In people with insect sting allergy, a bee sting may trigger a dangerous anaphylactic reaction that is potentially deadly. Honeybee stings release pheromones that prompt other nearby bees to attack.

The first step in treatment following a bee sting is removal of the stinger itself. The stinger should be removed as quickly as possible without regard to method: studies have shown the amount of venom delivered does not differ whether the sting is pinched or scraped off and even a delay of a few seconds leads to more venom being injected. Once the stinger is removed, pain and swelling should be reduced with a cold compress and a dose of Apis 30C should be administered. Apis 30C can be taken every 15 minutes for 4 doses if necessary.

Many traditional remedies have been suggested for bee stings including damp pastes of tobacco, salt, baking soda, papain, toothpaste, clay, garlic, urine, onions, aspirin or even application of copper coins.

If you are having difficulty following any sting, contacting your physician or a trip to the nearest emergency facility is important.

Bedbugs are small, oval, brownish insects that live on the blood of animals or humans. Adult bedbugs have flat bodies about the size of an apple seed but after feeding their bodies swell and turn a reddish color.

Bedbugs do not fly, but they can move quickly over floors, walls, and ceilings. Female bedbugs may lay hundreds of eggs, each of which is about the size of a speck of dust. Immature bedbugs, called nymphs, shed their skins five times before reaching maturity and require a meal of blood before each shedding. Under favorable conditions the bugs can develop fully in as little as a month and produce three or more generations per year. Although they are a nuisance, they do not transmit diseases.

Bedbugs may enter your home undetected through luggage, clothing, used beds and couches, or other items. Their flattened bodies make it possible for them to fit into tiny spaces, about the width of a credit card.  Bedbugs do not have nests like ants or bees but tend to live in groups in hiding places. Their initial hiding places are typically in mattresses, box springs, bed frames, and headboards where they have easy access to people to bite in the night when they are most active.

Because bedbugs live solely on blood, having them in your home is not a sign of dirtiness. You are as likely to find them in immaculate homes and hotel rooms as in filthy ones.

Most bedbug bites are painless at first, but later turn into itchy welts. Unlike fleabites that are mainly around the ankles, bedbug bites can be found on any area of skin exposed while sleeping. Bedbug bites do not have a red spot in the center like flea bites do.

If you wake up with itchy areas you didn’t have when you went to sleep, you may have bedbugs, particularly if you got a used bed or other used furniture around the time the bites started. Other signs that you have bedbugs include blood stains on your sheets or pillowcases; dark or rusty spots of bedbug excrement on sheets and mattresses, bed clothes, and walls; bedbug fecal spots, eggshells, or shed skins in areas where bedbugs hide; an offensive, musty odor from the bugs’ scent glands.

Getting rid of bedbugs begins with cleaning up the places where bedbugs live. This should include the following:

If your mattress is infested, consider getting rid of it awhile taking care to rid the rest of your home of bedbugs so they will not infest your new mattress.

Pulmonary Disease in the Elderly