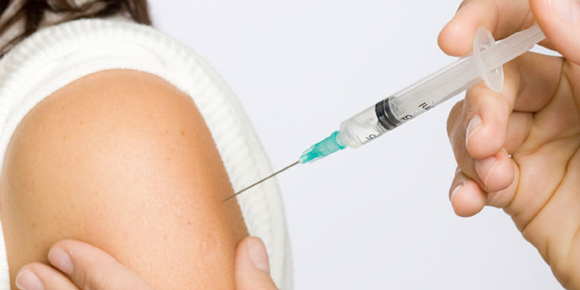 By Thomas A Kruzel, ND

Controversy surrounding immunizations has been present since they were first introduced in the1800’s. Heralded as a public health triumph they were supposed to decrease the amount of disease suffered by the population. In fact, the number of cases of diptheria, pertussis (whooping cough), tetanus, mumps, polio, rubella (measles), and chicken pox (varicella) did decline. However, critics of vaccinations pointed out that these diseases were already declining because of public health measures such as improved sanitation and enhanced standards for cleanliness in restaurants and with food production.

The main objection to standard immunizations lies in the fact that they are administered through the skin rather than through the oral/nasal route, the route designed by nature for proper attenuation of the offending agent. When an immunization is administered through the skin, it completely bypasses the large concentration of lymphoid tissue that has evolved in order to develop immunity. While antibodies are eventually formed, the immune system never gets a chance to fully attenuate the agent and the person is left with a less than optimally functioning immune system. An additional objection to conventional vaccinations lies with the additives and preservatives that are present in order to develop the vaccine. These have been shown to be highly toxic to humans and are linked to a variety of conditions such as autism, neurological and behavioral problems.

When the infective agent enters the body through the oral/nasal route however, the immune system has several days with which to develop immunity to it, allowing for a more complete formation of antibodies against the offending agent. An example of how this works is when children are exposed to varicella, or chicken pox. After the initial exposure, there is a several day period where no symptoms of the disease occur. Soon afterward the child begins to run a low grade fever for several days as the immune system begins to develop the necessary antibodies to the virus. This period is then followed by an eruption of a skin rash hearlding the completion of the process. Fever, which accompanies most infective agents that enter through the oral/nasal route, is nature’s way of speeding up antibody formation while rendering the virus ineffective.

Children, whose immune systems are developing, are better able to handle these common childhood diseases than adults whose immune systems are fully developed. This is in part because of the thymus gland located under the breastbone that is there for the purpose of conveying immunity to external agents such as viruses, bacteria, parasites, yeast, and fungi. As we age the thymus gland shrinks, hopefully having accomplished its mission., When an infective agent is encountered by an adult however, who does not have previous immunity, the disease state experienced is much more severe than that experienced during childhood simply because there is less thymus tissue available to develop immunity. Additionally, many adults have a history of medication use such as aspirin, Tylenol, or ibuprofen which decreases the bodies ability to mount a fever, thus making the course of the illness more difficult.

When the normal route of entry has been bypassed by injecting the immunizing agents through the skin, the body may respond adversely developing a high fever, convulsions, severe inconsolable crying or throwing tantrums, behavioral changes, skin rashes, constipation or diarrhea, or going into shock. In essence, the vaccines do an “end run” on the normal immune development mechanism and the body scrambles to catch up. In some cases mental/emotional changes occur within a few weeks afterward such as Autism, slowing of development, attention deficit-hyperactive disorder, and mental retardation may ensue. While vaccine manufacturers and some physician groups maintain that vaccines administered this way are entirely safe, there is sufficient evidence that adverse reactions do occur. Because of this, many consumer groups and physicians have begun to oppose mandated vaccinations and have opted for alternatives.

In Arizona, parents are afforded several vaccination options that allow them to choose that which is best for their child. Arizona allows parents to choose a medical, religious or philosophical exemption for childhood vaccinations. Additional information can be obtained by going to the State of Arizona Immunization Schedule – Arizona Exemptions web site.

The American Academy of Pediatrics recommends that immunizations begin at the age of 2 months and continue until ages 14 to 15. In some cases vaccination with the hepatitis B vaccine begins at 2 weeks of age and continues for up to 18 months. Physicians and consumer groups critical of childhood vaccinations contend that this schedule is too early, especially if the infant is being breastfed. Additionally they point out that children who are breastfed do not have difficulties when exposed to the various childhood maladies and in fact develop stronger immune systems as a result. They point to several studies that show that the number of long term illnesses in non-immunized children are less than in those who have received them.  Lastly, it is felt that beginning the vaccination schedule at such an early age actually impairs the child’s immune system development because it is a work in progress and the normal immune developing mechanism is bypassed by injecting vaccines through the skin.

Exceptions to this are seen with children who are malnourished, not being breastfed or have developed food allergies at an early age. These children generally exhibit a greater likelihood of contacting the disease or not developing sufficient immunity after conventional vaccination.

Homeopathic immunizations are administered orally rather than given as a shot. Because of the minute amount of the active substance present in the homeopathic preparation, the agent is viewed by the bodies’ immune system in a similar manner to that of the virus. Because it is being administered orally, the viral signature is attenuated through the bodies’ normal immune development mechanism, conveying immunity.

Dosing schedules will vary among practitioners but we recommend that the child receive a dose of the homeopathic nosode yearly until age 12 as a reminder or booster dose for the immune system. Parents are asked to pick one time of the year, usually in the fall during a period free from colds or flu’s, to administer the preparations. Generally we have the parents begin the immunization schedule at 1 to 2 years of age or about the time when the breast feeding schedule is winding down.

Additionally, all parents are given an Introducing Solid Foods Schedule to help with immune system development. Introducing solid foods into an infants diet while winding down breast feeding enhances the child’s immune system to develop because foods contain protein sequences that mimic the “bad guys” such as viruses, bacteria, yeast, fungi, and parasites.  These usually consist of foods such as squash, carrots, bananas and other colored fruits and vegetables such as are commonly found in infant solid food formulations. More complex foods are introduced later on as the child’s gastrointestinal tract develops further.

In preparation I ask that parents review some literature such as The Vaccine Guide by Randall Neustaedter or Vaccination & Homeoprophylaxis ? A Review of Risks and Alternatives by Dr. Isaac Golden. There are also a number of web sites devoted to alternatives to immunization such as vaccineinfo.net or www.vran.org. Once this has been done we sit down and go over all of the risks, benefits, procedures and alternatives so that parents will be able to make an informed decision. If they decide to pursue a homeopathic immunization schedule they are referred to a company that prepares the kit for our patients and are started on a schedule.

Along with the immunizations we also prescribe certain nutrients to enhance immune development while the nosodes are being given. After the schedule has been completed for the year, the parents are instructed to administer the appropriate nosode if the child comes in contact with another child who has the disease. An example would be administering the nosode variolinum to a child who has been exposed to chickenpox. This usually results in a short course of fever and may or may not result in a skin eruption.