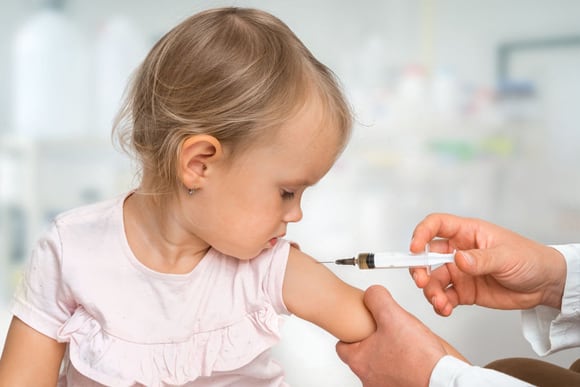 Almost immediately after the Covid-19 pandemic was declared, and the race to develop a vaccine began, at least one influential individual started calling for the Covid vaccine to become part of the infant immunization schedule. This of course makes no sense what so ever as 99.997% of individuals, from newborns to age 19, are unlikely to be affected by the Covid-19 virus, or if they do, experience mild to no symptoms at all. The group of children that were reported in the press to have died from the Covid infection were primarily those with preexisting medical conditions or undergoing chemotherapy for cancer.

Promoters of the idea to vaccinate children use several arguments to support their case. One is that by getting vaccinated, children will be less likely to infect older and more vulnerable adults. This argument of course does not stand up to the data that show that even with vaccination, there is still the possibility of Covid transmission. Being vaccinated does not eliminate this. The second argument is that vaccination of children will promote herd immunity. Heard immunity is a term that has been used to promote vaccination, the idea being that if enough people are vaccinated, then the community at large is spared from the disease. The reality is that this has never been achieved from vaccination and is unlikely to ever be achieved because of 2 things. The first is that adult vaccination rates would have to be high, approaching that of children, which they aren’t. Secondly the vaccines would have to remain active for long periods, which they are unable to do. Vaccines loose their effectiveness anywhere from 2 to 10 years after administration, and as we know, adults are less likely to get revaccinated with the percentage being less that 50%. Additionally, viruses change as they make their way through the population and if a vaccine can be made, it will become ineffective before to long. A prime example here is the flu vaccine that not only is ineffective but places certain individuals at greater risk of developing other respiratory diseases,

Previous studies on vaccines developed against SARS-Cov-1 uncovered a phenomenon that is now termed “pathogenic priming”. Pathogenic priming occurs when the person or animal that is vaccinated comes in contact with the actual wild virus. The encounter unleashes a severe and often fatal hyper-immune reaction, a concern shared by some for the Covid vaccine, especially if the individual had a SARS-COV-2 infection in the past.

An example of this phenomenon is the Dengue Fever vaccine that induced hyper-immune reactions in many of the children who received it in the Philippines, resulting in a significant number of deaths. Many vaccine researchers, aware of the likelihood of this occurrence, have expressed concerns that the vaccines they are creating will be ineffective as well as exacerbating the disease process. Additionally, adverse reactions to vaccines are common but often under reported by pediatricians.

It has also been noted that conventional vaccination does not produce the antibody response that would guarantee full immunity. In fact just the opposite has been found as vaccinated children are much more likely to develop chronic diseases such as diabetes, asthma, earaches and upper respiratory illnesses than their unvaccinated counter parts. According to Richard Moskowitz, M D, a child’s immune system development becomes skewed the more vaccines they receive, resulting in an incomplete immunity. This of course has been our clinical observation for the past 30 plus years and is why we have offered a safe and effective alternative.

In the rush to achieve “heard immunity” and to return life to “normal” wouldn’t it be a good idea to examine the scientific evidence with regard to development of immunity, the effects that the current pandemic have had over the past year and what steps should be taken to prevent further spread rather than blindly vaccinating children and infants with an as yet proven vaccine that has the potential to produce severe side effects and death?

How effective is the Food and Drug Administration (FDA) and whom are they working for these days?

Why are there so many different drugs for the same condition? What benefit do they have?