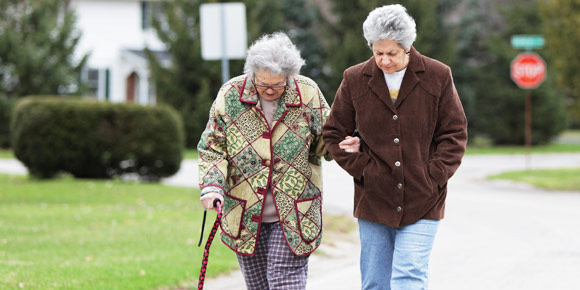 By Thomas A. Kruzel, N D

Gait disorders are one of the leading causes of falls in the elderly population leading to increased morbidity and mortality. It is estimated that there are approximately 2.5 million elderly persons in the U.S. who have some form of walking problem. [1,2] This ranges from 4% in age groups 65 – 74, increasing to 26% over age 85. [1,3,4] Statistics cited in a number of studies report that about one third of people over age 65 fall each year with this being a recurring problem in over half of them. [1,5, 6,7,8] About ten percent of these falls result in significant morbidity that increases with advancing age. [3,9] Falls are the fifth most common cause of death in the elderly, especially if it results in hip fracture. [9] Lastly, a fear of falling contributes to decreased mobility in seniors further increasing their risk because of the self-imposed immobility that results in muscle atrophy.

Physiology of Gait
Walking is easy as we do it all the time and rarely do we have to think about it. We may at times consciously take control and direct our gait when we dance, run or climb. The underlying mechanisms of ones gait are complex, and tend to become altered as we age.

According to the British Anthropologist John Napier, “Human walking is a risky business. Without split-second timing man would fall flat on his face; in fact with each step he takes, he teeters on the edge of catastrophe”. [10] From our first steps through childhood and adolescence, we continually refine our gait as the body grows and develops. [11] Control of balance and posture, both at rest and with movement is an integral part of propulsive movement, as we must maintain our center of gravity while doing so. Most of the body weight in humans is centered in the middle to upper body, which makes us inherently unstable as the legs become narrower in relationship to the upper body. In some individuals this upper body mass (obesity) can be significant, making it more difficult to ambulate. The parameters of ones gait are determined by the limits of stability with anatomical changes associated with aging make this inverted triangle more unstable. Elderly patients will often adopt different walking styles to compensate.

When compared to younger adults, elderly patients have significantly reduced gait speed, stride length and increased double support time [12]. Additionally, the toe push-off is less vigorous as well as there being a greater step timing variability [13]. These changes are thought to be due to either a degeneration of the balance control system, loss of muscle mass or compensatory adaptation due to changes of aging or fear of falling. [14]

There are 5 basic components of a person’s gait, all of which play a role to maintain stability with ambulation. Observation of these by the physician can provide clues as to arising problems with an elderly patient’s ability to maintain mobility.

1. Ability to stand – The patient should be asked to stand without using their arms. If the patient cannot do this, then have them try to stand pushing off from the armrests on their chair. Note how the patient was able to do this. Is it a smooth motion with good balance, a listing to one side or the other, or whether someone needed to assist them. The timed up and go test can be performed at this time as it is a quick and easy to administer test. Patients are timed as they rise from a chair and asked to walk 3 meters, turn and return to the chair and sit down. They may use their walking aids and a score of less than 10 seconds is considered normal with a score of 14 seconds or greater abnormal and associated with an increased risk for falls.

2. Posture – Elderly patients with an abnormal posture will generally have kyphosis, scoliosis or some degree of both. Rare patients will have a hyperlordotic posture from lower spinal muscle weakness or dystonia. Curvature of the spine may occur anywhere and should be noted. Changes in posture alter the persons normal gait motion.

3. Base – The normal width of foot placement is considered to be the width of the shoulders. The base should be noted both when standing and when walking.

4. Stride and foot strike – The length of a persons stride depends on the speed of their gait as well as the person’s height. Elderly patients rarely take long strides, but rather shorter ones in order to maintain stability. This also occurs with a fear of falling so that they appear as if they are walking on ice.

5. Arm swing – Arm swing is important to maintain balance while walking but will be altered with certain conditions such as stroke, Parkinson’s disease, patients with essential tremor or with choreform disorders. Often the patient’s stride is altered as well in order to compensate.

6. Turning – A normal turn requires a pivot, with one foot being kept on the ground with rotation occurring on the ball of that foot. The other foot then moves in the direction the person wishes to turn with the upper body following suit. This is normally accomplished as a smooth and effortless task but will be altered with certain diseases. This is where falls most often occur due to the inherent instability of turning.

Patient Evaluation
As with any condition encountered with the elderly, single complaints almost always have multiple causes. The most common causes of gait difficulties are pain, unsteadiness, stiffness, dizziness and vertigo, weakness, numbness, or a sensation of abnormal movement. A wide variety of other conditions can predispose to problems with gait, but are not as common.

The best predictors of whether the elderly patient is at risk for falling in this population are poor health, impaired vision and gait changes due to structural changes from aging or disease. The clinical diagnosis’ most often encountered leading to gait changes are degenerative joint disease, orthostatic hypotension, post CVA, intermittent claudication, congenital or other deformity, and rheumatoid or gouty arthritis. [16, 17]

Gait evaluation should be conducted on all elderly patients at some point in their treatment. This could occur at a specific visit or over a series of visits so that you eventually have a baseline to refer to. At each visit I observe my patients (of all ages) as they walk into the office, sit down and then stand, to see if there are any changes. As previously mentioned, walking is largely a vegetative function, i.e. we do not think about it we just do it, and a change here can often provide a clue that something else is going on.

History – This is probably one of the most important aspects of the examination as the majority of the time it will guide you to the cause of the gait disturbance. The history should be oriented toward problems associated with the chief complaint (ie, arthritis, hypotension etc.), family history, past medical history and in particular, a review of medications.

1. Nudge test – patient stands with feet close together while a light, steady pressure is applied to the patients sternum for a few seconds.

2. Trendelenburg test – to test any weakness of the gluteus medius muscle (abducts & medially rotates thigh while also steadying the pelvis), it will produce a slight depression in the thigh with contraction.

3. Range of Motion – of both the lumbar and cervical spine. The cervical spine ROM is important in the detection of dizziness / unsteadiness. This part of the exam is completed with the patient reaching over their head and then to the ground as if to pick up an object.

Walking Examination – the eight components of a persons gait should be examined. Further, the patient’s shoes should also be examined for clues as to the gait disorder.

1. Initiation of gait: This should be smooth, without hesitancy or ataxia. Hesitancy may be seen with Parkinson’s Dz.

3. Step continuity: when the swing foot is off the floor, the stance foot is pushing off the toes. If step discontinuity is present, this smooth flow is disrupted. This condition is often seen with gouty arthritis or other painful conditions of the toes.

4. Step path: Observe the patient from the rear as they walk, note any deviation the feet make from a straight line. Abnormalities are often due to proprioreceptive sensation loss as in diabetes or syphllis.

5. Trunk motion: With normal walking motion, there is almost no side-to-side motion, the knees are straight and arms are next to the body. Waddling gait may indicate unilateral or bilateral hip disease.

6. Walk stance: In a normal gait, the heels will almost touch one another; a decreased propioreception will cause a widened gait. A slight amount of this is normal in some elderly.

7. Turning: Turning is normally smooth and continuous. En bloc turning may indicate Parkinsons Dz while staggering may be an indication of mulitsensory defecits.

8. Heel to toe walking: Observe the muscles of the anterior leg (heel walking) and posterior leg (toe walking). Lumbar disk disease should be considered if difficulty with toe walking is encountered. Muscle wasting diseases and neurosyphilis should also be considered.

Sitting Examination – Examination should include range of motion of the toes, ankles and knees. Specific muscle testing of upper and lower leg and foot muscles is conducted next. Neurosensory examination includes reflexes, muscle tone, sensory distribution and cerebellar function (Babinski). If claudication is suspected, then evaluation of the pulses before and after mild exercise may be done. A good time to do your fundiscopic exam may be now.

Supine Examination – ROM of the hips in the neutral and flexed position is done. The Thomas test for hip flexion contracture and Patrick’s test for hip disease, Straight leg raise for sciatica and motion palpation for SI involvement can be done.

Measurement of the legs for equality of length and calf and thigh size will help assess for an anatomical short leg and muscular wasting. Assessment of abdominal muscular strength may be conducted by having the patient sit up without using their hands.

Gait disorders are a major cause of functional impairment and morbidity in the elderly population. By constantly evaluating an elderly patient’s gait we decrease the risk for falling and its accompanying morbidity and mortality. Further, we are able to begin therapy and rehabilitation at an earlier time making the chances of success greater.

5 Tips for Helping Kids Stay Healthy this Winter, and Throughout the Year!